The Right Tool for the Job

Seems that there would be few of us exOTC people with a pretty good intact OTC tool kit that was issued as far back as 1968. Well, say hello to three of them! The big one I was issued as I started work in 1969 as a Technician in Training at the DCA Regional Training School at Waverton. The other two smaller kits were picked up from ITMC Sydney staff that left and their tool kits were not collected from them.

The reason I collected the extra kits was that there were tool kit checks and you had to produce your kit and it had to have all the tools or you had to replace them. The other two kits were considered by me as donor kits as tools often went missing through no fault of your own. Tools strayed when you had a large job and a few people were involved. I do not expect that they were intentionally taken, but accidentally.

For that reason I also had 2 lockers. On the occasional locker check, no one ever asked to check all the lockers – you just took them to yours and they opened the one that you indicated. I forget precise details of the checks, but I seem to remember that one was part of the police investigation into all the missing construction items that was later found to have been taken by the MSS security guard. Anything I did not want to have seen was always in the second locker. It was a big loophole in a rather tight system of checks and balances. No one had their names on the outside, so it was easy to pull off. On the check sheet it was assigned to a project – whatever I had in the works.

There were also two tool rolls provided with my first tool kit and I also still have these. They are extremely useful. Many of the tools are still etched with my tool kit number “AT64”. It is interesting to see the “lamp puller”. Rarely used these days, but still useful on some old equipment. 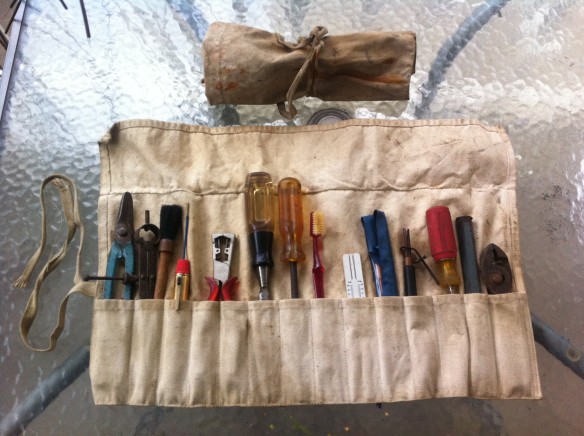 These are Telstra’s property and if any one from Telstra with an official collection note would like to come and get them, I would be happy to return them. They were at my home when I was terminated from my job before the 4 weeks notice was up. I believe that I was the first TO that did not serve their full 4 weeks because of competitive issues with OTC. 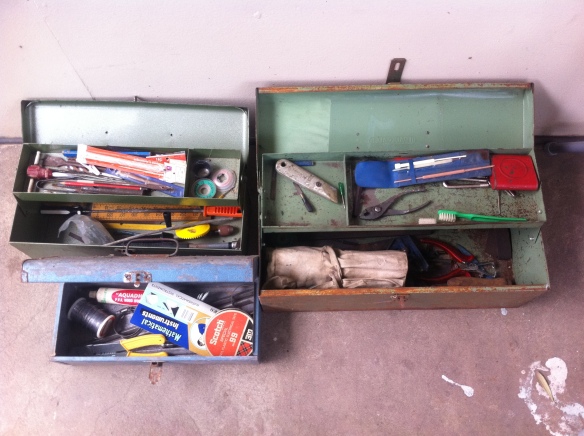 Although there are a few extra items of modern origin in the kits, most items are original – the red oil can, the tool rolls, the cable strippers and the old Stanley knife are a few of the original items visible in the kits.