[Ed: Neil has sent me these great photos and story of Doonside and you can click on them to open and then click a gain to see them in HiRes. Use your “Back” button to return. Thanks Neil]

This post is a series of pictures with their description below: 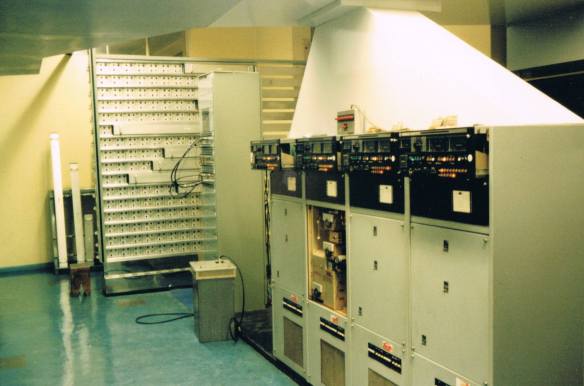 Pic 1. (above) A total of 40 AWA 1Kw ATS1 Tx’s were purchased by OTC in 1970 primarily for SOLAS (Safety of Life at Sea). Four are shown here with the 75 ohm aerial patch rack located behind them. A 75 ohm 1Kw air cooled dummy load sits on the floor. At the rear of the photo sits a 30Kw 600 ohm aerial exchange. 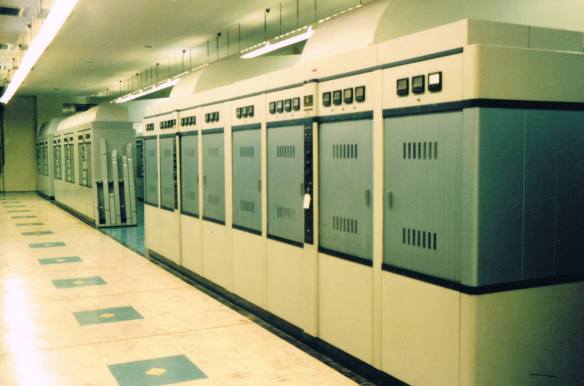 Pic 2. (above) In the foreground are two 30Kw AWA CLH30 manual tune Tx’s. In the background of this row are five AWA CLH30J auto tune Tx’s. All these Tx’s were made redundant by the new 10Kw Marconi Tx’s in 1988.

Pic 3. (above) In the foreground is the JRC 1Kw NSD8 (Jap Tx) purchased in 1969 for evaluation purposes which it failed. AWA won the contract with the ATS1 which was also used by the Navy in a 10Kw version named the ATS10. The Jap Tx was written off in 1990 when a set of three replacement 5F65R output valves were quoted at about $20,000. Behind it sits two 2Kw AWA CTM-2K MF Tx’s. Further back are two AWA 1Kw CLH-1L Tx’s. At the end of the row are three AWA CLH-10J Tx’s.

Pic 4. (above) Ten years after being installed the new Marconi Tx’s along with remote control equipment were dismantled & shipped to Ningi near Bribie Island. The Receivers from Bringelly were installed on Bribie Island at a shared site with the University.

Pic 5. (above) The Doonside building exterior had changed very little since 1956 despite major equipment changes internally. On the left is the cooling pond tower for
the 2 diesel generators. 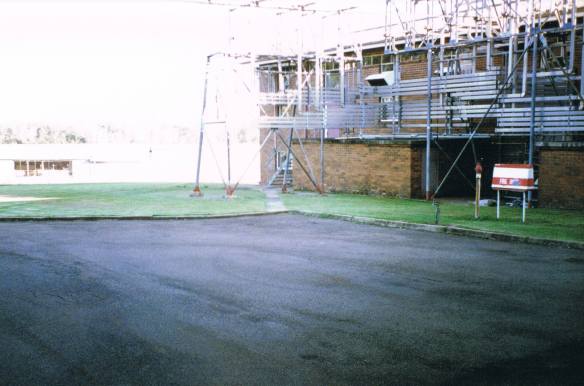 Pic 6. (above) Overexposure on the left makes it hard to see the old riggers hut in the background.

Pic 7. (above) Optomux remote control from La Perouse for ATS1 Tx’s in foreground. Next to it the ATS1 aerial patch panel with the ATS1’s in the background.

3 thoughts on “Doonside in Pictures Pt2”