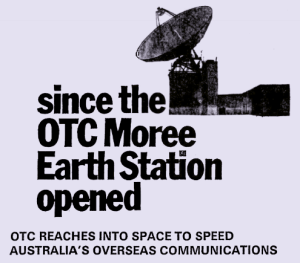 This advertisement was spotted in The Age newspaper. The Age is one of Melbourne’s Newspapers (Australia). It was dated 14th June 1968 and was soon after the opening of Moree Satellite Station. The article showcases the stations ability to receive (and Transmit) TV programs around the world.

The terms used seem quaint by the general standards of today. The general public were not as tech-savy as the readers of today! It should also be noted that Ceduna Earth Station was not yet finished and so the advertisement shows a US sports event. At this time our TV viewing was more inclined to be from Europe and the UK.

It surprises me that the Internet is flooded with information about the OTC Carnarvon Earth Station, but there is little on the Internet celebrating the existence of the Moree Earth Station. We would love to hear from any of the exOTC staff that might like to right a story (or two).

You can click on the image and click again to enlarge it. Use the back button to return to the article.